incidentally, have you noticed the number of fake Anya Hindmarch bags recently? They've gotten so prolific that 8 Days even has a feature on how to spot the fake from the real:

Some are pretty obvious, though, I mean, when I went to KL, I saw a shop selling the bags where you could get them in 3 different colours?

But considering the exclusivity of these bags [less than 50 brought into Singapore, not for public sale, that means no lowlifes like you] I think we can safely assume that most of the bags you see on the MRT are most likely fake lah. 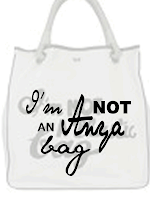 [you saw this first on my blog. If anybody copies me, they're dreadful copycats and pirates! Copyright belongs to me!]

I wanted to print this on tote bags to sell, but Cafepress is pretty sticky on copyrights and stuff. Sheesh.

So I settled for this: [Re: If I can't get a designer bag, I may as well pretend that I don't give a damn about them anyway] 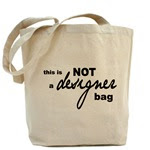 Available at my Cafepress store, but prices are in USD, sorry!

**No copying, no pirating or anything! I did this image and I put it up first! Copyright is mine, mine, mine!

Where did you get the font from? It looks like the real deal...

It ain't... :p I downloaded it from some free font site a while back...