[another photo-heavy entry. Please take toilet/drink/tv break while waiting for pictures to load fully. All pix copyright of Aki and can be found on Flickr using the tag "chijtoapayohopenhouse2006"

Others who have blogged abt this include the Slayer. If you know any other IJ girl who went and blogged about it/posted pix, lemme know so I can compile a list. cheers!]

After much waiting, my alma mater has finally finished the finishing touches on its new building, and this grand old dame has seen fit to meet the outside world again.

A group of us old girls had met up to go for the Open House on the 7th Jan, because we missed the school, we wanted an excuse to meet up and also because some of us wanted to see whether it really looked like a mosque. [which was the rumour I heard. heh.]

On approaching the school, we realised that the entire building had completely changed from what we had grown up in.

Ok, definitely the facade of the building has all changed. Not only that, but our once wide-spanning track had reduced in size by nearly half, and was now 3 lanes instead of the old six. [wah lau...] Because of the carpark, and the fitness facilities, the field had also reduced in size, and there was less grass than before. [damn]

The canteen had also changed. Gone were the creaky wooden benches, and their accompanying pastel tables. Now each girl had a seat for their butt and much more colourful [and possibly durable] tables.

Does that seem to take the fun out of recess for you? One thing we used to do was squeeze the whole group onto the bench so that we could all sit together and eat and gossip and bitch about whoever. Now it seems that the current seating arrangement would restrict the number of girls to a table.

Then again, it's probably to preserve the furniture. Why the benches were so creaky in the first place was because of all the butts that tried to squeeze onto it back then.

And remember this old bell? It used to be green, but now they've painted the frame blue. The bell itself looks just as old as before, though, and no wonder: The thing was passed down from Victoria Street. -_-!! 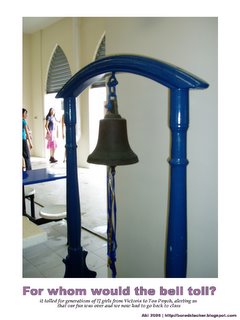 The Much Bigger Hall

Stained glass concourse on one of the floors

Most of the classrooms had better facilities and equipment, no surprise.

After that it was over to the Primary side.

In case you didn't know, the Primary and Secondary schools, which used to be 2 separate buildings in the same compound, were now joined together in the middle, letting the girls freely interact with each other and probably allowing them easier ways to run over to each other's canteens or bookshops.

Back then, the Primary and Secondary schools were 2 buildings separated by a carpark. The Primary school girls would look longingly at the older, taller girls and dream of the day they would be as tall and big as they were. We also went to their bookstore to buy all sorts of stationery that could not be found in our own kiddy bookstore, earning us a stern reprimand from the Principal that we were to stay where we belonged and wait when we were older.

Funny thing was that when we got older and actually became those older, taller girls, we would then look back at the Primary school, and long for the days when we were there. We also went over to the canteen to buy the [cheaper] food of our younger memories, and earned ourselves scoldings that we should have known better at our age, and we were to stick to our own compound and not intrude on the little ones' spaces.

Funny how things change... and how they don't.

So anyway, now that we've gone over to the Primary school:

The general air of the Primary school just screamed "Cute!" in most of the things, not surprising considering that it is, well, Primary level after all. So much of the stuff here looked way better than the serious stuff that the Secondary school had:

Wayang corner with parents doing a wayang of tired parents Different colours for each floor

The classrooms look much better now than what I went through, and guess what? Apparently this is because this model doesn't have wires all over the place, and also that everything was contained inside one unit, instead of a separate CPU unit. Which made sense, because you didn't want Primary school kids knocking into the CPU or tripping over wires, or attempting to use it for anything other than its intended purpose. The Inner Quadrangle of the Primary school... so that the kids will learn to read the name of their school... from the air.

And finally, the cutest thing of all:

Have u ever seen a cuter toilet sign?? Aaahh!!! >D

And finally on the way out:

Girls from IJTP may remember this better, but this was where the old walkway out of the primary school used to be. Beside the walkway, though, [where this new one was now at] was a little grassy enclosure with the oldest trees ever. You couldn't even call it a garden because all that was there was grass, some leaf litters, roots lying all over the place, and massive, old trees that branched out and sheltered the entire place.

The grass enclosure was separated from the carpark by the walkway, and since the schoolbuses used to drop off the primary schoolers here and pick them up after school here as well, this made the grass place a perfect natural playground for all those girls. Like, how could any kid resist? The whole place seemed separated from the rest of the world, and was like one of those enchanted magical forest patches. It was also sheltered from the glaring sun by the branches of those trees, which provided the roots for us to play on as well. I spent too many mornings/afternoons playing there.

Sadly enough, that entire patch was destroyed, and is now totally missing from the new school, as you can tell from the photo. And this is one of the things which made me feel really old, like someone I used to know alright had died or something, and that all I would ever see of him would be in my memories. Seeing your old playground destroyed... suddenly you feel your age. Or more.

And that was it. With the knocking down of the old, I had no choice but to discard my childish past and allow others to have their fun now. Now it was time for me to join the ranks of the groan-ups and the adults and do serious, responsible stuff. Nowhere was that point more forcibly underlined than the destruction of this old school.

Like all newly renovated places, I didn't quite feel as if this place belonged to me any longer.

But the memories remain. And if ever I feel like that kid playing on the roots again... :)
Posted by Aki Tan at 2:58 PM