I have a secret guilty pleasure: I like notebooks. I especially love those with blank empty pages because they feel full of potential to become full of well-drawn sketches and interesting ideas, whether or not I actually manage to fill them up!

From a love of notebooks, one day, I discovered the art of bookbinding and realized another thing: Instead of buying notebooks and collecting them, I could make them for myself! What a brilliant thing!

So every now and then, I experiment and try my luck with scrap paper and cheap notepads. Sometimes I have total disasters that I have to throw, sometimes I land up with something that just maybe is usable and sometimes, I have a success!

This one I made is closer to a success. I thought of doing a notepad holder because I have a bunch of A6 notepads which are easier to carry around than my larger journal, and I also thought they would look nicer in a holder that I could re-use every time the paper ran out. I have a bunch of paper and thin card and I had a Typo envelope that I liked the look of, so why not?

I finished this in one afternoon (with one loooong break in between for lunch and shopping) and I'm quite happy with the result. It looks nice and because I used more cardboard, it's stiff enough to hold the notepad without bending. Also with the elastic band, I can take out the notepad and change it with a new one when the paper runs out.

And so, the instructions!

You will need:
Paper for the cover (I used a Typo envelope)
Paper for the inside cover (mine is a striped pattern, from a book I got from Daiso)
Thin cardboard (I used free flyers)
An elastic band (you can buy a packet from Daiso)
Scissors
Glue
Stapler or needle and thread 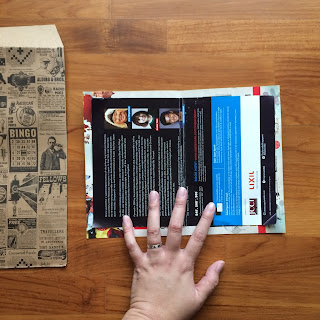 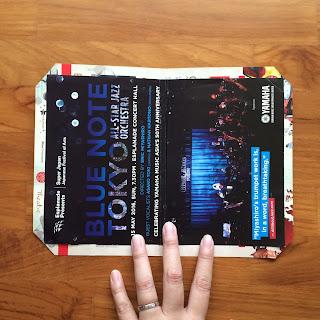 1. Measure the flyers and cut them to fit your notepad. ( I was lucky because the flyers I chose were just half a inch larger than my notepad, so no cutting here for me ) Then stick them together so that they are as hard as a paperback's cover. ( I used two, but if you have good quality cardboard, you could probably just use one.) Since I used two pieces of different sizes, I also cut the four corners off so I could fold the edges down. I felt this would give the edges extra strength. 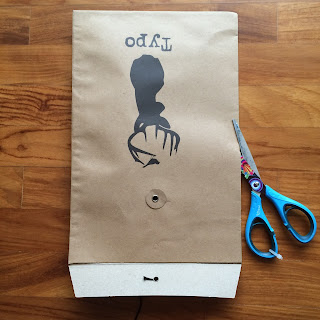 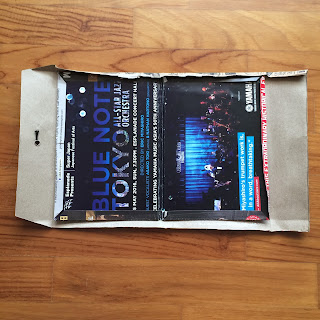 2. Cut the envelope and choose one side to be the front cover. Then put it down facing downwards and lay the cardboard on top. Fold down the edges and glue them down. The cardboard will add strength to the holder. 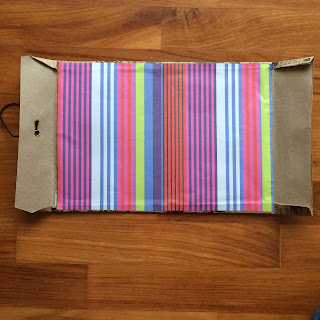 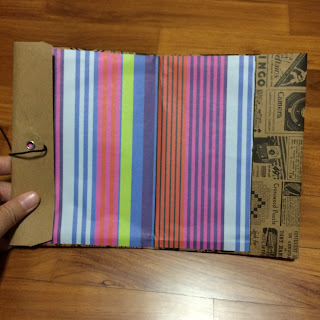 3. Take the coloured paper for your inside cover. Measure it so that it fits and paste it down. If the front cover is longer like mine is, fold the edges inward like in the 2nd picture. 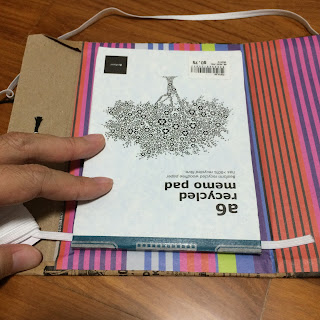 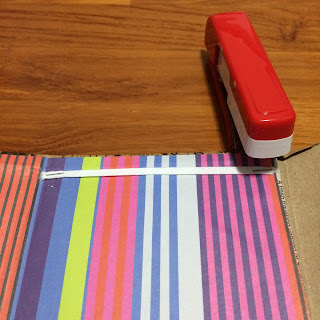 4. To attach the notepad, I stretched a piece of elastic across the notepad so that I knew how long a piece I needed. I then cut it off and because I'm a lazy boredslacker, I stapled the elastic to the cover. More hardworking types can use needle and thread to sew it on. 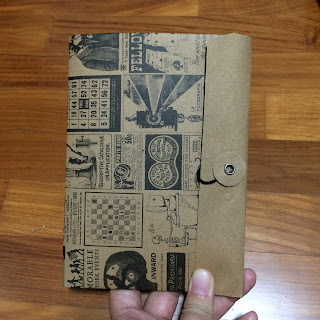 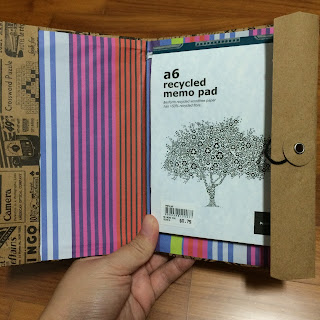 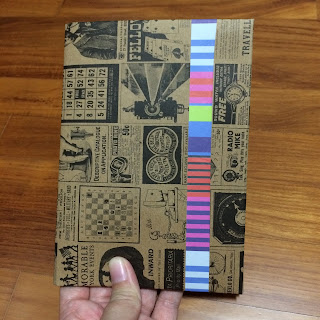 The finished notepad holder, from the outside and the inside with the notepad inside. For a personal touch, I took some excess paper that I had cut off for the inside cover and pasted it on the outside.

Looks great in pictures, but mind you, I did not show you:
- The mess of paper and stationery strewn around me on the floor
- My intense concentration when cutting and measuring and praying that I didn't do something wrongly
- Me having to stop every 10 minutes to position the materials nicely so that I could take a shot for the blog
- My irritated grunts when I found out I had stapled the elastic band wrongly and had to take out the staples
- More grunting when I was done and had to clean up the mess
- The holder doesn't close snugly so to close it, I had to loop an elastic band around it

Still, I do think it looks good. Can't wait to fill this with well-drawn pictures and interesting ideas. ( fingers crossed )