Every so often, I feeling like expanding the hub's artistic horizons, so I will pull him off to some art exhibition or other where he will see things that leave him in total incomprehension.

I don't know if the hub's artistic horizons were expanded, but I can be sure on the total incomprehension, from the look of confused bewilderment on his face from gallery to gallery. Would you 'get' the following artwork?

1. All that glitters is not gold, it's guns too. 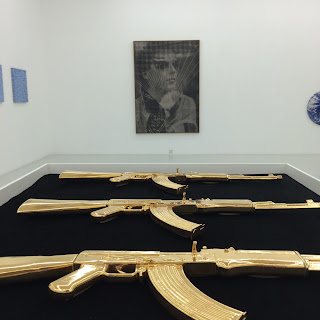 2. The art is in the hidden message. See if you can spot it. 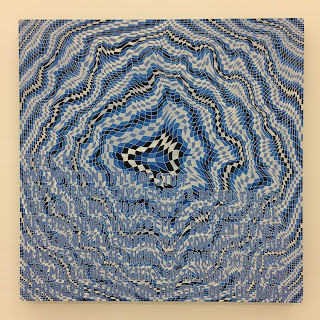 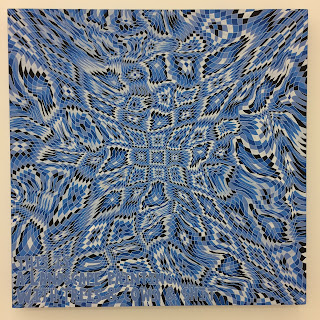 3. I wish I had such art assignments when I was in school. This is Art Outreach, they are an educational non-profit that promotes art through programmes such as art and cultural heritage tours, school programmes and they have a visual thinking lab at Gillman. Check them out on Facebook because they have programmes for adults and children alike. 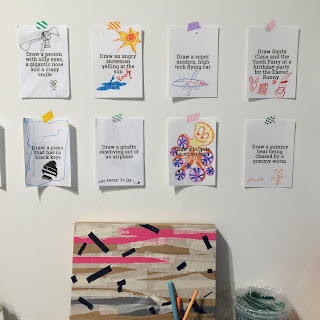 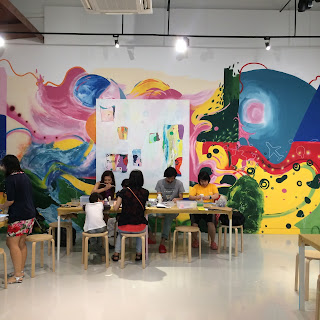 I do want to spend a bit more time writing on the following exhibition because it turned out to be my favourite out of the Day and they are from the exhibition Reflections on Still Water by Zheng Lu. Zheng Lu is a Beijing-based artist and he created works out of stainless steel to look like splashes of moving water. Most remarkably, when you look up close, the sculptures are made out of thousands of Chinese characters. 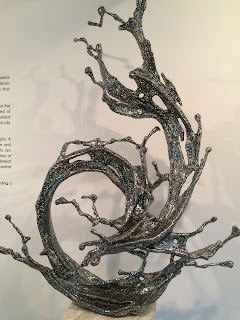 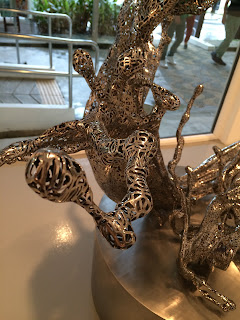 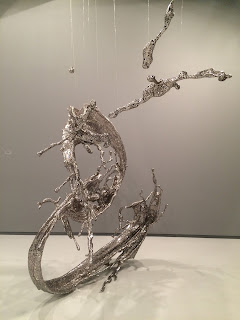 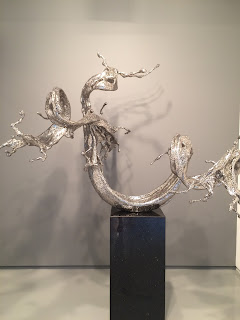 The ones I've captured here are only the small ones. There was also a large splash inside which went over the room! They really caught my attention because although they were made from hard steel, the sculptures still looked very fluid and it felt like they were in motion even though they were steel.

Or they looked like a Harry Potter spell frozen in mid-air.

Reflections on Still Water is held at the Sundaram Tagore gallery from now till May 19. This will bring you to their website.

The other I found interesting was one held at the Pearl Lam Gallery entitled The Third Script, a two-person exhibition by Boo Junfeng and Linda CH Lai. Their exhibition was a reflection on how our identity and recollection of the past are formed and how incomplete and non-linear perspectives can skew our memories.

The most touching part of this, (other than the incomprehensible parts) was a short film by Boo called Parting. The film is about a Malaysian man suffering from dementia who comes to Singapore to look for his long-lost lover whom he left behind....... in the 1960s. I found the scenes with the man very touching as he went through Woodlands and plodded his way through Singapore. He walked around with a bewildered expression through most of the film (kinda like the hub that day) and his tenacity finally led him to the school where she worked. Did he find her? I'll let you go to the gallery to discover for yourself. :p

The Third Script is held at Pearl Lam Gallery till 19 June. This is their website.

So in the end, after seeing all these, are these Art? 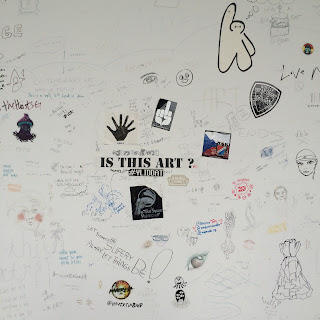 Well, maybe it really depends on the beholder.

I did wish more of the galleries would make an effort to promote their art. Most of the information I wrote above came from media release notes and curatorial notes that the galleries were giving out that day. The reason why some are better written than others is that these galleries actually had the notes to give out. Also, the staff in the galleries mostly left us to wander around and there weren't much information put up. Um, if you do hold a public event inviting the public to come, you could be a bit more inviting.......? Guess they weren't impressed by my Pusheen keychain.
Well, you do have to consider they are a gallery, not a museum, which means they are also interested in selling the artworks to worthy buyers and unfortunately the only way I could bring home any of their art was to pilfer the free postcards.

Maybe one day, who knows? Meanwhile, for more free art, I offer you the following photographic artwork. 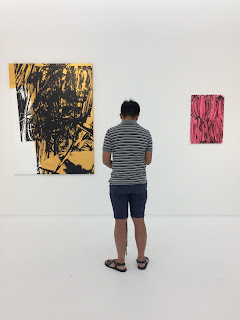