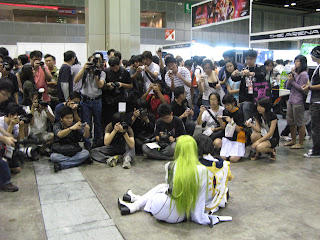 You gotta love an event when cosplayers turn up. It's guaranteed to liven up any anime event where the main purpose is to sell as much merchandise as possible and promote any screenings as much as possible. Because, as from the picture above, inviting the cosplayers invariably invites the fanboy/girl-photographers. Yes, I know, moi being one of the mentioned.

The event itself was interesting, but there's a glut of too many retailers [toy sellers, comic sellers, art companies selling books and posters, anime companies promoting upcoming movies and serials, and one manga cafe] and too few fanart. [exactly 4 stalls -_-!!!] Which is a pity, because judging from the art on those fan tables, it's a crime against society that some of those people aren't doing this professionally. One more group of victims of the recession. *shrugs*

But you din' read this post to read my rantings on the unfair treatment of Singapore artists. No, you did it to see pictures of cosplayers, didn't you, and here they are: 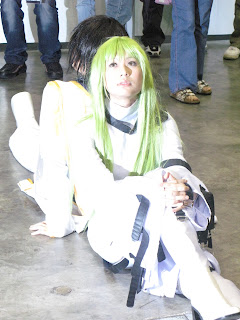 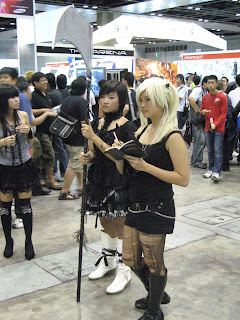 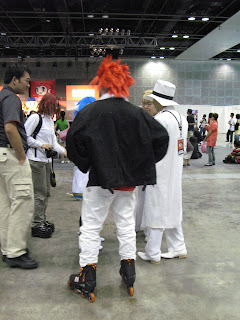 Other cosplayers have a hard enough time getting around in their costume. This guy did it complete with skates. 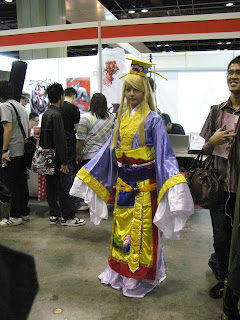 I love the detail and attention on hers. 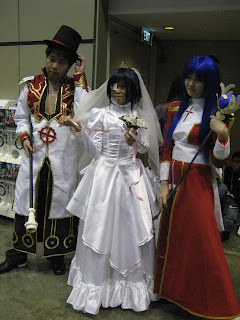 I have to insert a blogpost of thanks to the cosplayers who gamely posed for the shots, despite us photographers hovering around like shot-hungry vultures everytime one of them so much as combed their hair. The cosplayers I approached for some shots were more than willing to pose in their costumes for my 1 or 2 shots, and the other 100 that came from other photogs as soon as they spotted them posing.

I'm learning something about photographing other people. Most people are more than willing to pose if you ask politely and take a good shot of them. [no one wants fugly shots of themselves on the Internet] So if you ever want to take shots of people, the first thing to do is just ask. 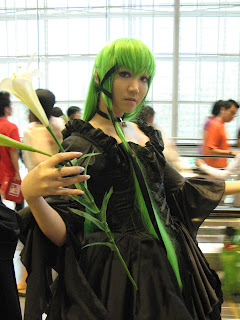 I loved the delicate way she posed with the flower. 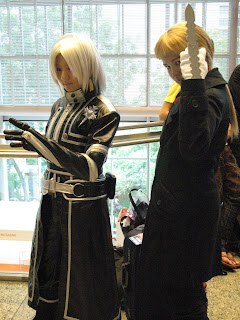 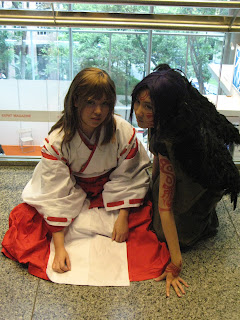 When I was taking the picture of the two cosplayers above, I looked down and I saw something you would not usually see on the ground: 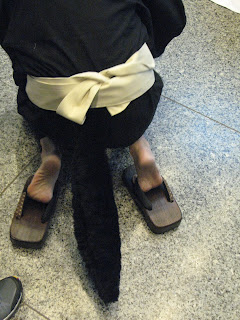 A tail! Belonging to one of the next 2 cosplayers: 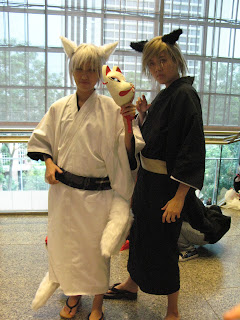 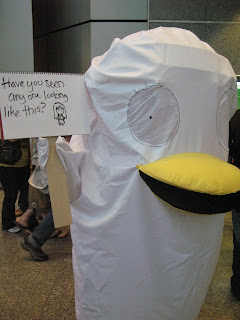 But he's the cutest, can?????? Most of the time he had a friend helping him to get around to places, because, face it, where are the eyeholes on that costume?

Fun though it was to walk through and take photos, more could be done for the con. I remember going for one that was organized by a major fan club once and you could tell the difference. There were tons more fan events, fan booths, fan art, fan stuff... you get the idea. It's more interesting to shop through the art done by fans who really put their heart and soul into their art and stuff rather than.... a bunch of panels put up by odious Odex. And how about more art and doujinshi?

The con has potential, just wished it did more.
Posted by Aki Tan at 10:11 AM