No, this is not a post about beach jazz, this is really the 2 kittens suddenly adopted by Quet. 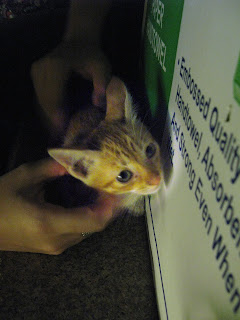 Quet's friend had found the above Nova and his black sibling Bossa near the Esplanade, and if she and her colleagues had not rescued the kits, they could have been culled by the authorities.

Nova was placid enough to let us take her out of the box and walk around the seat. Bossa, being the more psycho one, tried a few times to scratch the hand that tried to take it out, so we gave up after a while. Later on, when it probably got a bit lonely, we took it out, whereupon it tried to make a break for freedom, ran into Yenn's vest and encouraging its obedient sibling to do the same thing. [Yenn had the scars to show for it]

They are cute, though. Here's Nova: [check out the ears] 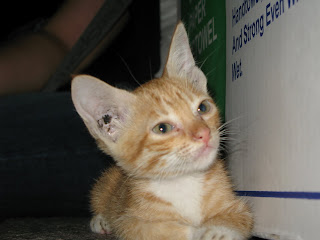 We called them Bossa Nova because of the jazz that was playing at the open stage. Indeed, while Quet was driving them home, they mewed the loudest when her Dark Knight soundtrack was playing, but kept quiet when she switched to 92.4 These are some cultured kitties!

Quet and her friend were supposed to split the kits between themselves, but later the kits were found to be too young and too fond of each other to split, so both cats ended up in her house!

Last I heard, they were rapidly running amok all over her house, playing with the gleeful abandon that all children have and causing no end of anxiety to their new owner. In the two days that they had been in her house, they had ran amok, making her have to chase them down, bankrupted her with their vet checkup, caused her to sprain an ankle, and got themselves stuck in her massage chair while they were running from her.

After I bemusedly heard all this from her on Monday night, I can only conclude, that these kits are not destined to be this for her:

Well, it's quite funny reading this blog entry~

Yup~ These kittens are quite cute and "adorable". Just that they always run away from me =(

Nice photos! Until now, I still couldn't manage to take a nice photo of my own kittens...