Due to the bucketfuls of experiences we had over in Athens, the only way to tell you all about it is to divide it into sections, so here goes Part 1...

We touched down at Athens Airport on a bright and sunny Sunday afternoon. 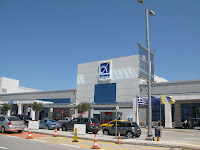 So in my opinion, a trip to Greece is all about its myth, its history and thus, that means scampering a bunch of rubble that used to be somebody's palace. 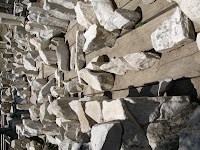 Marble rubble that presumably used to be something

It makes one feel like Indiana Jones. Except that I never got hit by rolling boulders or chased by angry swordsmen or Nazi soldiers. -_-!!! Which leaves me that much more time and leisure to explore the ruins left behind by the great Greek civilisation.

The most famous of all, of course, being the Parthenon, located in the middle of the Acropolis... 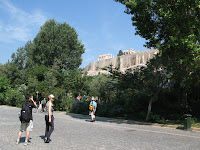 So after a gruelling half n hour trek, we finally make it up to the Acropolis. 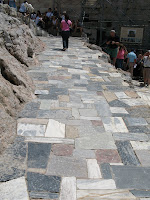 Some of the best marble flooring you will get in Athens

Magnificent views you will get up there, though, when you finally make it up... The Parthenon itself is famous for the optical illusion employed in its construction to make it look more regal and grand than it would have been. 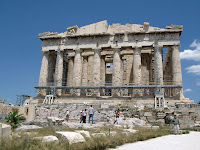 Notice how it seems to be leaning away from you? That's not an effect by the camera, it's partly because of the architecural illusion as well.
Damn, those ancient Greeks were blardy smart......

Another set of ruins that were interesting were those at Ephesus, in Kusadasi, Turkey.

Brief history lesson: Before the sea receded several miles inland, Ephesus was actually an important harbour town, with thousands of people living in it, temples, bathhouses, and even a grand library and theatre, where St Paul was supposed to have preached.

Which of course all disappeared when the sea went away, cause what point is a seaside town without, er, a sea?? After a long while, the town became buried in sand until rediscovered.

And what ruins they discovered! 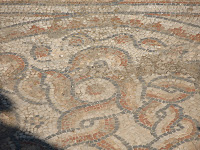 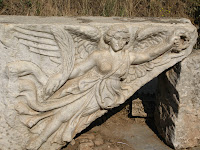 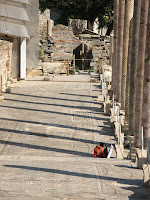 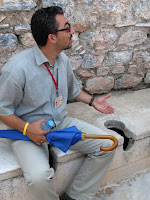 Our guide demonstrates the use of an ancient public toilet, not that it needed much explaining

The most magnificent structures, though, had to be the library and the theatre. 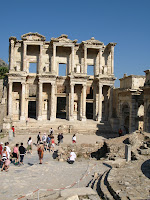 The library, or the front facade that was left. Many people complained that they weren't able to find the book they wanted. 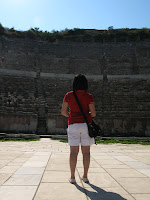 Quetzal preaches to an enthusiastic audience in the ancient theatre

Other ruins visited were the Palace at Knossos, on Crete, and the Temple of Poseidon, on Cape Sounion, mainland Greece, but these 2 were the most remarkable of the lot, because of the cultural importance of the structure, [Parthenon, Acropolis] and the amount that has been preserved [Ephesus].

If ever you visit Greece, or Kusadasi, Turkey, I highly recommend these two to visit.

Things NOT to do when visiting ruins:

1. Smoke, use aerosol sprays, or use other ozone-unfriendly products 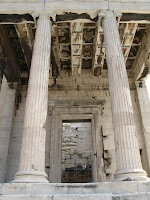 The Parthenon is slowly being corroded due to acid rain falling on the structure. Since presumably the ancient Greeks did not use hair spray, their structures are thus not designed to withstand such environmental corrosion. Save the Past. Be green.

2. Do some decorating of your own 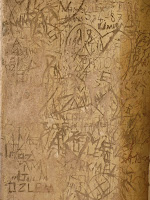 You may not agree with the decor scheme of the ancients. Nevermind about it. This structure has lasted longer than 200 generations of your family. HAVE SOME RESPECT!!! 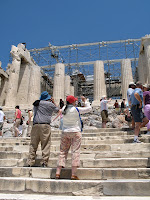 ARGH!!! Always look around first to make sure you aren't blocking other people's cameras. Your rump isn't so photogenic that I just have to have it in my photo. -_-!!!

Ok that's all for the ruins, because towards the end of the trip, Jules and Quet declared 'Ruin Fatigue', being, the viewing of too many piles of rock already. ^_^!!! More next time on Greece if I find the time!
Posted by Aki Tan at 11:21 PM