I ended the last blog post on a pretty depressing note, so here's some cheering up.

Frankly, after all the hoo-hah on Vday, I had pretty depressing expectations for my birthday, ranging from 'He won't come out at all' to 'He'll come out, but leave straight after lunch'.

And then, what do you know, when he finally told me for real, that he could have to go home after lunch to do his project, my face pulled into a longish shape and I couldn't even bring myself to say, "Ok." or anything else to him. I didn't even want to look at him, for fear that all the negative qi that I had been carrying since Vday suddenly spilled out in his parents' car while they were driving.

So he came up with a compromise. We would meet early in the morning, at 9, and then head down to Vivo ourselves before my parents came.
( Ergh, waking up early on a public holiday )

Who'd've thunk, he actually succeeded in making it a great day and released all the negative energy I'd been carrying around for about a week. 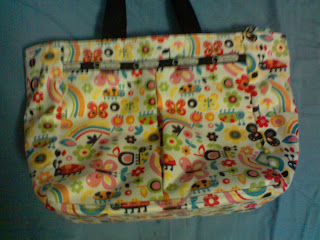 Cutesy insect bag from LeSportSac, which made me squeal just to see it. Aint' it cute??? 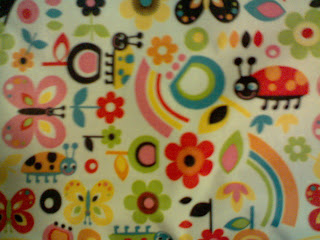 Details on the bag. A lot of cutesy insects, flowers, rainbows, but NO dragonflies. :p 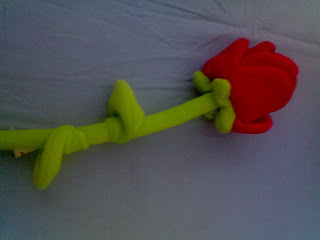 And I even got a flower! I've never gotten a flower from a guy before... *sniff sniff*

[btw it's a toy because I think plastic is too cheap, and he thinks real will die in no time]

But I'm not such a cheap whore as to be won over by semi-expensive gifts, ok? He did do other stuff on that day itself that managed to turn my heart.

For one, we stopped at the Golden village cinema while shopping, and we saw that Ghost Rider, which he wanted to watch, was showing. He then turned to me and asked, "You want to watch a movie?"

Huh? I thought you had to finish your project which deadline was in one week and which you had to piah overnight for the rest of the week for?

But as much as I want you to spend the day with me, I really don't it to be at the cost of your project, especially since you would have to spend so much time on it.

"Look, if you want, say you want, and I'll watch the movie. If you don't want, then I'll go back home after lunch."

"Then let's go buy the tickets."

Then later, after my whole family had eaten a potentially-cardiac-arresting lunch at Carnivore, [no guessing what the restaurant specialises in] my dad gave the waiter his credit card, and the waiter actually came back with DF's!!!

Who knew, but he had actually given the waiter HIS credit card halfway during the meal, and he paid for my entire family!

[No small sum either. My dad just gave me the money to pay him back, and I asked what if he doesn't want the money? Then apparently it becomes another birthday ang pow to me. >:D I'm tempted to never bring up the subject with the DF again.......]

I wonder if this is all part of the ups and downs of a relationship? There are times where I feel there's no hope for us any longer, that he doesn't care, that he's a bodoh blockhead, that it's just not worth it anymore.

And then he goes and pulls something like this, which reminds me all over again why I'm still with him. :S

Of course, on the subject of birthdays, many thanks of course, to all the others that brightened up my day:

The whole IJ gang, including Slayer, [ +new child Bucky] Jubilee14, schwarz_kreuz, necroz, sylveracyd, doe and Bel who camped on my floor, ate all the pizza and chicken, and watched 2 eps of Prison Break with me, and who gave me the always-welcome Kino vouchers. :D [Which are GONE already, after just one trip to Kino :s ] Also, the really cute cat frame, :D and the tie-dye shirt which I'm not sure I have the guts to wear in public :S

Juls and Quetz, who brought me to dinner at Sushi Tei, [which is my alltime favourite for SAKE...] and for the leave-in conditioner. All the sashimi, sushi that I wanted to eat, before I got too guilty about it.

EVERYONE else who sent me great SMSes and remembered the day when I stepped one year closer to 30. :) :) :) Thanks, ya all.

Maybe the time till the next birthday won't be too bad.
Posted by Aki Tan at 7:33 PM