Flashback to the Past

One day, I saw a notification on Flickr that I had no Pro account, and that only the first 200 photos of my account would be shown.

Because of that, I thought maybe I should delete some of the photos from the account, reasons being 1) I already had copies of those photos on my hard drives and 2) I wanted to free up space for other stuff.

So I had to go into the account and discover what were the photos that I should delete. Only to find a whole trove of goody oldies.

For example, who would have thought this illustration, from back in 2005, would strike such a chord now? ( Although for polarly opposite reasons than when I first did it ) People never change either. 4 years on, I still irritate her and she still takes revenge for it.

Some made me feel regretful. I don't know when I'll ever be able to churn out something as nice as this again: ( Or whether I'll ever have the leisure to do this in real life ) Other than these, I also found a whole bunch of thought-lost photos from Graduation 2003 (!!!) that made me realise that, however fat I thought myself back then, I was actually thinner. InThan in the present now anyway -__-!!!!!! And like my weight, other subtler differences could be found if you looked closely enough. I was thinner, just like some of the others, [although the graduation gown did a wonderful job of hiding those figures] Faces looked fresher, even with the lack of makeup. No eyebags, worry lines, and a totally fresher expression in the eyes, without the effects of lasik.

I'm not sure if I should ever show these photos to future generations.

A more poignant were the even older Redang Part 1 photos I found, where all of us looked thinner, younger, fresher, and totally unaware of all the upcoming crap that was awaiting us in the so-called real world. The photos, which back then seemed so new and fresh, now took on a slightly dated feeling of being old, already beginning to take on a sepia tint although they were clearly in full colour. The colours had already faded a little, and bled a little into each other, so that the outlines were not as clear as before. Looking on them, you start to think, did it really look like that? Does my memory fail me?

Maybe these I should keep as a warning to future generations. ( "Don't think you'll never grow old. Look at Mummy and Aunty back then......" )

I only had slight regrets in the end when I was deleting the photos from the account. Of course, the important ones had already been saved in my hard drive, so no worries on that part. But as the pictures disappeared one by one from the profile page, it seemed to draw a comparison with our memories of our youth.

It was as if with each delete, I was cementing a fact that these were times and attitudes that I would never be able to revert back to. That they were gone, lost, somewhere in my past. Even though I would be able to view them again from time to time, that was the only contact I would ever have with a past that was irretrievably behind me. 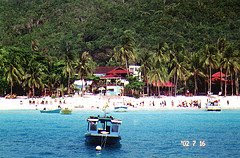