So if I ever have kids, does that make them kentang kia?

But I'm kentang what, so must translate to kentang terms:

My kids in the future will thus be french fries. And I'll probably be the baked potato. [Because the potato would have been 'cooked' ;) ]

It's a fascinating period for several reasons:

1) The enforced conformity of the citizens, and the repression of desire that arises. When the govt determines how you work, where you live, and when you marry, what does that do for the wishes and desires of the people?

2) The elevation of status of the Mao, from once-guerilla leader fighting for all the ordinary workers and people, to All-Around God above petty peons Whose Every Whim Must Be Obeyed.

3) The ferocity of the Red Guards and Mao Thought Propaganda Teams [I'm guessing this last moniker is directly translated from the Chinese], personal bulldog troops of the All Around God who were swift in exacting severe punishment to any infringement of their All Around God And Leader.

4) The similiarities between the Cultural Revolution, as seen above, and the modern day workplace, especially in places like Yenn's and mine. 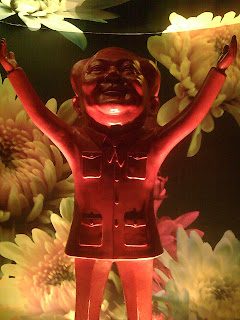