Comic book and toy geeks, take note: Today is the last day of the first ever Singapore Toy and Comic Convention.

Slayer and I went down, so for more pix, you can probably check out her blog. Me, I'm gonna blog about the horrendous logistics of the Tokidoki signing. :p

What's a Toy and Comic Con after all if you can't get merchandise [at wildly discounted prices] from your favourite designer? 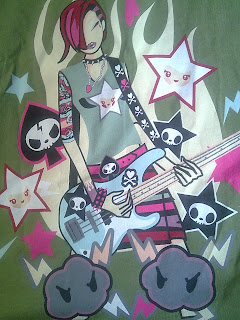 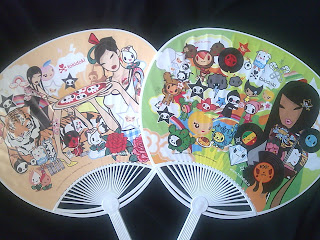 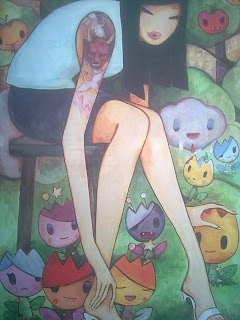 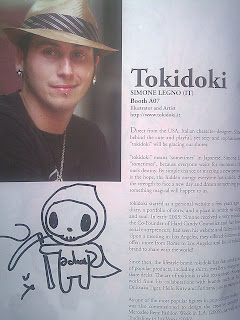 
And also a handful of stickers featuring his characters, not shown here.


But mind you, it was almost a matter of blood, sweat and tears in order to get those signatures from a jet-lagged Simone Legno. For one, I wonder if the organisers of the convention were blindly unprepared for the hordes of nerddom and geekdom descending on Suntec city. There were NO QUEUE LINES for gift redemptions, or signing sessions.

What results thus is ABSOLUTE CHAOS especially when autograph sessions start. When Slayer arrived for the earlier Tokidoki signing, she described it as a horde of fans descending on the glass table where the hapless Legno was frantically signing every piece of his designed merch being thrust at him. [think of 90% off sales at Robinsons]

Then when I came for the second autograph session, I was No 4 at the table. Together with Nos 1 to 3 [order decided by mutual consent and based on proximity to signing table] we marshalled some people into a sorta rough queue behind us. Which, Singaporeans being the queue-disciplined people we are, was formed pretty easily. Until other people decided to cut in front of us from the other side, yelling that they'd been queueing longer than I had. Hey, you were queueing since before 3? That's weird, cos I was there since 3 and I only noticed you coming close at around 330.

The dumb thing was that all this mayhem could have been avoided with a bit of forward planning, some string and a couple of pieces of paper. All of which were conspicuously missing at the autograph sessions. -_-! And at least I scooted with some autographs. Some other people were pissed off at missing the gift redemptions [after queueing for more than an hour] because other people had cut in front of them.

All in all, great convention, good intentions, bad planning.
Posted by Aki Tan at 11:44 AM