Melbourne Part 3: The Wild, The Wonderful and the Just Plain Weird
The 3rd part of my trip was really a wild shopping trip all over Queen Victoria Market and much of the shopping Swanston street [sheepish grin] Instead of subjecting you guys to that, here's a short list of miscellaneous photos taken in Melbourne: 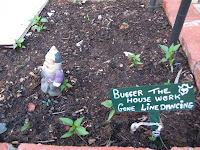 Taken at Grandma's house. I think this is where I got my work attitude from. 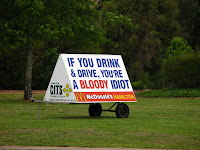 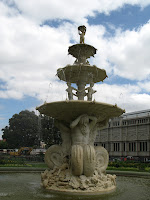 A fountain. Looks unassuming till you get near it and notice the detail. 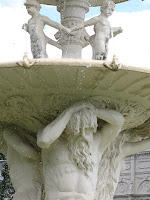 "Aw f'crissakes! Stop pissin' on me!!!" Those are some evil cherubs, alright. 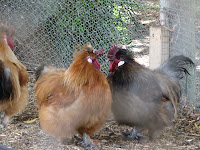 At same nature reserve: The first albino peacock I ever saw. Ain't she a beauty?? 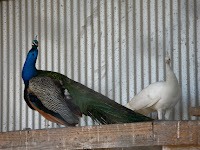 And my all-time favourite: 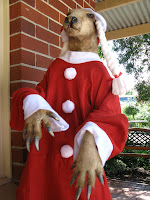 Return of the Psycho Kanga!!! This guy looks as though he could be in some Australian-Chucky-the-Kangaroo flick.

This is a city that I must come back again, and not entirely for the usual family reasons either. There are several things about the experience in Melbourne that I would just love to see again.

People here are friendly. In most of the shops I went to, even the most jaded shop assistant still managed to put a somewhat friendly tone in her voice, and they don't trail you all over the store as if you were a potential shoplifter. It also helps that Melbourne has a very diverse population, almost similar to Singapore, and Asians here don't stand out as much.

Shopping is FABFABFABBABY. Unlike Singapore, which is dominated by large shopping malls with the same number of large brands in each mall, Melbourne city has a lot of small stores and small brands each with its own unique brand identity and look. I LOVE this. It means you can walk from one end of the street to the other and shop in about a dozen different stores with different stuff. It also means you are in grave danger of burning out your credit card.

Strangely enough, I also like the cattle and sheep. I'm a city slicker through and through. I lived in urban space all my life, and if I ever had to seriously live in the country for an extended period of time, yes, I will die real bad. But while I'm on a temporary trip, and taking my time to drive through the country, I cannot get enough of green rolling hills, and herds of cattle and sheep just grazing idly, because I have never seen so much GREENSPACE before.

And having been to a number of cities, I daresay each one, although being an urban jungle, has its own character and identity unique to itself. By the same logic, Melbourne has its own look, its own personality that you cannot find in London, Paris or Berlin. Its a smart casual kind of city that knows how to work hard and slack hard as well. They work through the day, but they know when to switch off the PCs and head for the pubs. No wonder everyone else finds us Singaporeans incurable workaholics. Melbourne is the city, for us slackers. :)
Posted by Aki Tan at 12:49 PM