Note: I'll be heading to KL today with Juls, Yenn and Quetz over the weekend, on a trip that has been plagued one way or another.

First, all of us forgot to book hotels, leaving Juls to make a last minute call about, oh, yesterday. -_-!!!

Then it turned out that Juls would be detained in Singapore for some biz, delaying our departure time from morning to afternoon. This also caused Candle to back out, becoz of the possibility that we would be stuck in Singapore.

The last one just hit us today. Quetz remembered too late that she had an appointment at work that couldn't be postponed. -_-!!! She'll be taking the bus down herself in the evening and reaching KL at late night.

The bright side? I always have the unverifiable hypothesis that if all the bad luck happens at the start of the trip, it'll take away the bad luck that was supposed to hit us during the trip. Let's just hope this hypothesis doesn't fail me now. :S Or if it does, well, at least I'm only in KL..........

Anyway, I went to NDP last night with the DF.

( The Slayer has also blogged quite a bit about NDP, complete with better photos than mine, so I'll leave it at that for now. :p [But you were sitting in the same sector in front of me, I think. I recognized the dancing lobster!] ) 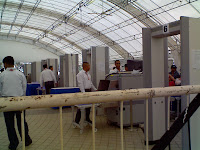 Security was tight, from the moment you walked through the metal detectors, through to the Esplanade area itself. Heck, in lieu of the recent hairgel-ipod bombing, they even wanted to check all the liquids we had! Which meant the DF being detained for a good time, while they opened the 4 bottles of juice and drinks we had bought along. -_-!!! 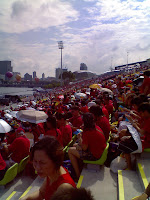 The crowd at about 4pm. We managed to watch some pre-parade concert, which consisted of singers from all 4 races, [as politically correct as possible] singing songs from the complimentary NDP CD. 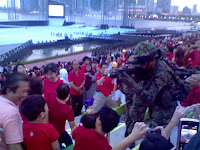 Hands Up! Some guys in uniform put on a military display. This was made interesting by the uncle in pink, who later on proceeded to poke his finger into the rifle butt. [Some photos you just regret not taking] 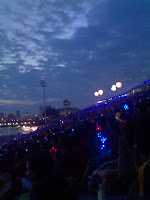 The crowd after sunset starts to take out their star lights and the stadium is transformed into a sparkling sea of lights.

And then what every Singaporean is really waiting for... 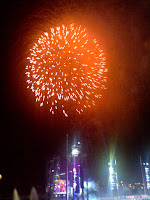 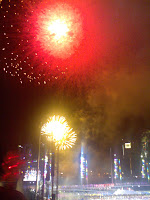 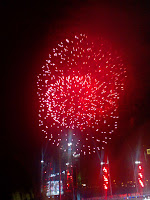 Other than that, the celebrations were, *shrug* all right. They actually reminded me of the dance shows put on by North Korea, but still all right. The bag was probably the main draw of the event. [DF got me a red one!] It came packed with so much stuff, that DF and I agreed that the economy must be doing better than we thought. :s

Included:
- 2 bottles of Newater, peanuts and 1 pack of sour cream and onion chives
- 1 cheesy Osim animal hat
- the blinking star light
- a mini flag to put on your desk
- an official NDP07 soundtrack
- a trash bag and sticker. The sticker came with a lucky draw number and what you had to do was stick it onto the trash bag with your trash and you were eligible for a lucky draw. I have to admit, I didn't see this in the bag at first, so I was pretty impressed with the way all the trash was cleared so conscientiously by us Singaporeans until I found the lucky draw sticker. Sigh........

It was a good NDP anyway, and it's pretty cool to be able to tell my kids that I was there on the first River parade, and no, the stage didn't sink.. :p Let's look to more years of independence, and great goodie bags! 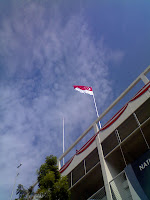