Today, I started on one of my Big Hairy Audacious Goals, which was to clear and organize the journals on my table. This was an important and urgent goal, because

1. They were a disaster waiting to happen.
The journals were in a precarious pile on the table and every time someone breathed near them, an avalanche occurred.
2. They were not in a convenient location.
I wanted them arranged in a more accessible way that made sense for me. They were arranged in a huge stack on top of one another, and that certainly made it 'convenient' when the one I wanted happened to be, oh, right at the bottom.
3. They were mixed up with too much other junk.
There were other stuff mixed up with the journals which I was not using. This included stationery, stickers, random pieces of paper, name cards, other homemade journals...

All combined, the pile was long overdue for a decluttering a la Marie Kondo. As I started to clear the pile, I uncovered even more bits of paper and trash, resulting in another small scrap heap that I had to clear other than the journals. 😖 Some were easy, like outdated insurance letters dating back from 2008. Some were more difficult, like Christmas cards from close friends. *sigh*

One thing became clear though: My creative output was not equal to the material input that I had accumulated. For all the paper, stickers and junk I had kept, how much of it had actually turned into actual artwork? I had kept a lot of paper, thinking "This would come in handy if I wanted to...*insert craft project here*" but for work or some reason or another, I never got around to doing it and the materials just stayed there. Or I would buy new materials, thinking "I can use this if I... *insert new craft idea here*" but again, the materials stayed there.

Even the things I used were also existing in surplus. I did more journalling in 2016 so I told myself I would allow myself to use whatever I had bought, without fear of failure. I wrote on my nice notepads, I tore things out of my Flow Book for Paper Lovers, I shrugged away the numerous mistakes I made, resolving to be more careful the next time, I gleefully tore out metres and metres of washi tape.

And I still had tons of those materials. 😱 The things in my room seem like a neverending black hole of paper, washi tape and stickers. Made even worse by my seemingly bright idea to do a couple of projects with junk paper, which meant that I had also accumulated a small stack of junk paper from work......

I think I'm not the only person this has happened to. How many times have we bought something with good intentions, thinking that it will come in handy, or that it will help us to achieve some goal? Hands up all the guilty ones who have books unread (me), paints unused (me), clothes unworn, exercise equipment being used as clothes hangers and other things bought with good intentions in January only to be covered in dust by March.

For me, the bottom line is clear. I bought these supplies to be creative, so be creative I must. That is,

my CREATIVE OUTPUT must = my MATERIAL INPUT

Everything I have now must be used, used and used even for what seems like the most frivolous of reasons. It doesn't matter even if I don't churn out the Mona Lisa from my supplies, what matters is that I use them to the best of my abilities and use them to improve my creative skills in whatever way possible. That also means that I will make mistakes and end up chucking away some hard-earned material. Take it as a lesson learned rather than a wasted failure.

The funny thing is that during this month when I was doing that, somehow I started to improve in small ways. My brush lettering improved because I now had oodles of junk paper to practise on. My journalling started to look better when I used my coloured markers to write with and my washi tape and stickers to decorate. I even found some of my markers running out of ink, which was sad yet gratifying at the same time.

So if there's one thing you have to remember: 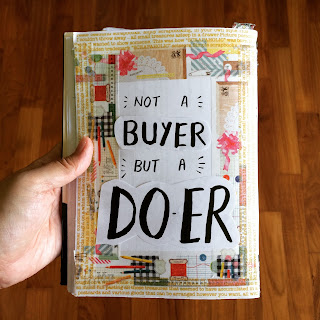 We are not put on this earth to buy and accumulate things. We are meant to DO things. So if there's something around you that's accumulating, (like my craft materials) ask yourself why, and just DO something with it to get started. We are not buyers of life, we are DOERS.