First off, Happy New Year 2017, with all its bright hopes!

I'm proud that I managed to revive this blog as much as I did in 2016. (Every blog post is an hour I didn't spend watching more TV!)

I know that traditionally, this is the time to be setting NY resolutions, ie, to blog more, to write more, to do more. Usually that is what I would have done as well, but considering that next year is full of flux with the baby coming, I thought I would do something a bit different. 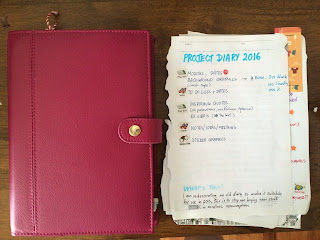 The journal on the left is one that I kept from 2015-early 2016. I'm opening it again for 2017 because I still have some pages left in it that I would like to fill up, maybe with simple reflections about each day.

The pages on the right are another story. They are a mix of pages that I did in 2015. Some, like the one on top, are project ideas that I had. Some were weekly diary entries for 2015 and I decided to make a fresh start by discarding them.

Other pages in the pile carry heavier meaning. See, 2015 was a pretty bad year for me, work-wise. I had a lot of frustrations and setbacks at work and at times when it all got too bad for me, I journalled them down. So in that pile are also pages with a lot of negativity.

2016 became a little better because some of the things dragging me down were taken off and also, I became a bit more mindful and organized so I could be a little more chill about work. When I opened the journal and looked at those pages though, the unhappiness in those words became fresh in my mind again.

As I read through them, I thought, Do I want to carry these around with me?

I decided not. I ripped out the pages and tossed them.

In life, there are lessons that we learn that we can carry through life. Those lessons we can carry with us as we live. Bad memories and emotions, however, are a different thing. They drag us down with their negativity and make us relive them over and over again. They keep us in the past instead of carrying us on to the future.

In this way, I suppose, I'm carrying out the opposite of a resolution. Instead of making plans to step into a bold new future, I'm tossing and burning the past behind so that it doesn't follow me anymore. I'm still not sure enough about the future to make plans or resolutions but I am certain enough about my power over my past, to make sure it doesn't haunt me any longer. And I guess that's as good a start as any.

So Happy New Year everyone, may you start the year afresh and leave it all behind.
Posted by Aki Tan at 1:06 PM