Malacca is a place with no watches, and too much food.
In just 2 days, I felt as if the point of the whole trip was really about the food. Even before I went, people didn't say, "You must see this place!" but "You must try this! You must try that! You have got to eat this or you never went to Malacca!"
So... the food. :) First signature dish: Peranakan food. 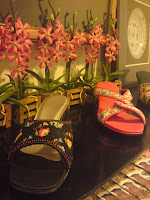 Our lunch stop was a last minute resort. We had driven all the way there, reaching there at 230pm, only to realise that most of the good places closed at 2pm for afternoon siestas. -_-!!!!! So we had no choice but to drive around till we found a place that was open.
Bayonya is a Peranakan restaurant. We ordered a few Peranakan dishes for Yenn and Candle to try. Chicken pongteh was a rich chicken stew in soy gravy [which really caught my eye because on the menu it mentioned potatoes, haha!] and buah keluak, a sort of stewed hard-shelled fruit, Yenn realised, was a taste that really had to be acquired. [I haven't acquired it either]
The food was ok, but the part that brought it down was the fish, which had been frozen, so when it came to us, the meat was hard. Note: Peranakans are picky about food, as observed when my mother complained to the staff about the state of the fish upon payment.
Our dinner place, Aunty Lee, was much better. Aunty Lee was a nondescript little restaurant a bit further from town. The towkay neo of the place was a bossy little woman, who insisted the 5 of us sit at a table for 10, despite us asking for the smaller table. Some dishes we asked for, she said, "dun have." and overall she had the impression of a rather aunty-ish mother. -_-! [Not that unlike my own mother, so I'm wondering if this is another Peranakan trait...]
But when the sambal prawn came..... Shiiioookk....
The prawns, though small, were lathered in a rich sambal sauce that looked like it would sear the tonsils off, but was actually sweet and delicious. The lemongrass chicken was tangy and juicy. The omelette and kangkong came in a huge heap upon their plates. And all this for 77RM.
When leaving, I reminded father: Put this place down on the GPS. :)
Another signature dish: Chendol. 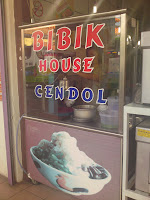 My parents pooh-poohed the many chendol stalls around, including the supposedly famous ones, and, in the afternoon, led us down Jonker St to a little shop selling titbits, and that had a little chendol stall in the front.

I don't know if the chendol was necessarily better or worse than the famous ones, but it was slurpingly good, after walking around in the hot afternoon sun, and had one advantage over the rest. 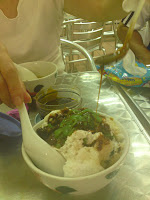 Yes, if the coconut milk was not flavorful enough, little jars of gula melaka were sitting pretty on the table for you to scoop as much as you wanted!

Contrary to the name 'gula', it really isn't that sweet. [And no, it's not just by my standards] Gula melaka really has a particular taste, that tastes like syrup, but it isn't clingingly sweet. So when you mix it into a lot of coconut milk... shiok... :)

Baba Charlie wasn't a restaurant, or a cafe. We went far out from town, drove down a nondescript little side lane, entered someone's house....

To find a kitchen cooking for an entire army barracks. [Or it seemed that way to me]

We walked into another room....

To find a huge kitchen table covered with baskets of nonya kueh. Kueh, kueh and more kueh. Yes, Baba Charlie is a wholesale supplier of nonya kueh, who opened up his kitchen for the hungry greedy hordes to come in. 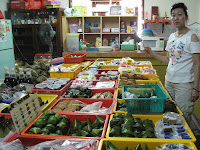 We bought a number of the stuff to eat for lunch on the way back to Singapore, and then Yenn realised that she couldn't stomach them because of the generous amounts of coconut shavings in each kueh. :)


As I said, a trip characterised by food.

The interesting part about the food, though, was that due to my parents' experience, we managed to avoid most of the tourist traps, and found hidden gems like Aunty Lee or Baba Charlie, both of which we would not have found unless we were in a tour group. (ew) If we had to eat chicken rice balls and western food [?] for 2 days, I don't think that the trip would have been very interesting.

Rather it is the out of the way places that make it fun. Making you feel as if you know something that the rest of the populace doesn't. That makes you feel as if you're sneaking out of a boring party to head to where the real fun is.

Epilogue: But after all that good food, there was still something I sorely missed, and that I just felt I had to eat before going back to Singapore...... 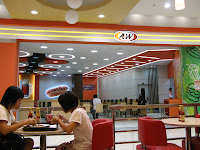