I caught a few opening minutes of the Singapore Biennale last night. 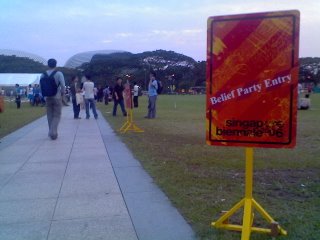 Firstly, a gripe. If you're advertising to the open public that the event starts from 1800h onwards, then kindly let the public see something at 6!!! I was there from 6 onwards and the only thing going on was some laundry lines with balloons on them being installed. All the main [and I'm guessing, finished] installations were kept away in a tent with entry only for VIPs and media.

Anyway, soon enough I managed to catch this installation: 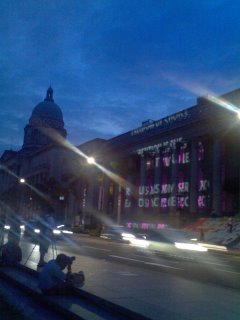 Notice the words on the front of the Supreme Court? The artist had a long list of sayings and [possibly] propaganda flashed onto the facade by a high beam.

Which creates an interesting effect doesn't it? The grandness of the project lends it a V-for-Vendetta kind of effect, its sheer magnitude somehow lending it more gravity, especially when using a solemn old building like the Supreme Court as a background. You kind of believe that there has to be some kind of truth to such large, glaring words, and that they have to have some kind of power or truth behind them. Until you read lines like this: 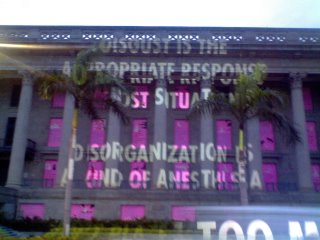 for those who can't see clearly, it says Disorganization is a kind of anesthisea or something spelled like that

Clearly something I can identify with, considering the state of my room and my desk at work. And the next one is something interesting too: 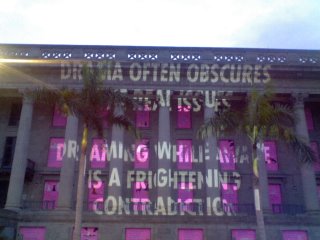 In the words of goldfish, this is one mindfuck awright. :)

For more info, go to the Singapore Biennale website. The theme for this travelling exhibition is Belief, so many installations will be held at religious places all over Singapore. Check it out, take a look, and maybe open your minds a little.
Posted by Aki Tan at 11:12 AM