A Burst of Patriotism 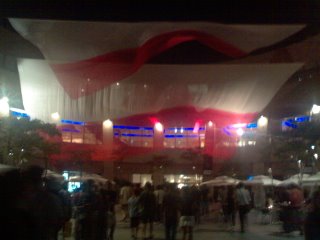 Flags at the Esplanade
Frankly, the happiest part of National Day has to be waking up later on a Wed morn and the school holiday on Thursday. [yes, one of the perks of the job]

In a recent SMS conversation, The Slayer was bemoaning the hypocritism that pops up during such occasions. Why do we need a National Day to remind us of how patriotic we should feel? Why do we spend most of our year complaining about this country and then a burst of pride only on one day?

Well, I was thinking of it, and I decided, well, you don't need a Valentine's Day to buy roses for your lover, but it'll be nice to do so all the same ain't it? ;) Regardless of all the petty arguments you've had all year.

I think our feelings towards our country is somewhat like that, like a up-and-down relationship or a dysfunctional family. We go through a bunch of shit here and there, but at the end, this is where we are. This is ours.

I think in order to fully appreciate National Day, it's not quite enough to think of all the things we have here. [The usual litany of things being safety, convenience, oodles of food.......] Maybe we should instead think of what it would be like in another country, and what we don't experience here, that we might overseas.

We don't have suicide bombers, terrorists, and other acts of mass destruction on a day to day basis.

We don't walk down the streets without stares at the colour of our hair and skin, and without condescension and derision. [you can't appreciate this unless you've really been stared at]

We don't have governments which are willing to imprison and starve their people in the name of power, and tell the rest of the world that it is right in doing so [though it has its faults, I doubt you can really compare the PAP to the North Korean govt, or the Myanmese govt, or the Pol Pot regime, or even the US.]

We do not contribute half our income to tax. [owch]

And it is only in Singapore that we can walk around with that sense of belonging, where everything is so familiar that it ceases to be an amazement any longer, where you walk with that sense of confidence that tells you this is where you're supposed to be and this belongs to you

I don't know about you, but after touring a couple of countries, it's always a kinda relief to come back, and feel that mental 'click' as if I was an astray puzzle piece and I was finally coming back to familiar ground, where I knew exactly how to get around, how to talk to people, and be understood, and where I was treated exactly the same as everyone else.

Maybe that's the most important thing to appreciate about our country, no matter where. That this is where we know where we stand.

Sure we have our problems, but it's probably a good thing that most of the problems and the things which piss us off about our country are problems of the educated and affluent class, ie issues of democracy, income, press freedom, rather than problems of the desperate and poor, ie, how am I going to live till the next day?

So for all the little things, for the big things, and all the shitty things about this country, yea, I'm still pretty glad to be living here.

Happy National Day.
Posted by Aki Tan at 9:24 AM